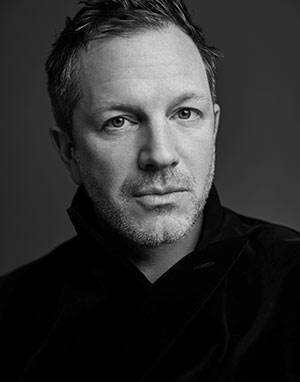 After working more than ten years in the fashion industry between New York, Milan, and Paris, with leading photographers, brands and magazines, he he curated the various renditions of the globally successful touring exhibition The Fashion World of Jean Paul Gaultier: From the Sidewalk to the Catwalk. Initiated by Nathalie Bondil, Director and Chief Curator of the MMFA, the retrospective travelled to twelve cities and drew more than 2.1 million visitors, breaking records for a fashion exhibition. Opened in Montreal in 2011, the exhibition travelled to Dallas (Dallas Museum of Art), San Francisco (Fine Arts Museums of San Francisco), Madrid (Fundación MAPFRE), Rotterdam (Kunsthal), Stockholm (Swedish Centre for Architecture and Design), Brooklyn (Brooklyn Museum), London (Barbican Centre), Melbourne (National Gallery of Victoria), Paris (Grand Palais), Munich (Kunsthalle der Hypo- Kulturstiftung) and Seoul (Dongdaemun Design Plaza), where the exhibition tour came to a close in 2016 after five years on the road. A total of six publications on Jean Paul Gaultier have been produced by Loriot over the course of this record tour, being awarded among other prizes, the Grand Prix du livre de mode in 2012. The groundbreaking Jean Paul Gaultier world tour was followed by his exhibition Love is Love: Wedding Bliss for All à la Jean Paul Gaultier, presented at the MMFA in 2016 and at the Centro cultural Kirchner in Buenos Aires the following, the exhibition will announce more dates soon. He also co-curated the exhibition Be My Guest at the London College of Fashion (LCF) in 2014 and collaborated with Dr. Valerie Steele on the Fashion Underground: The World of Susanne Bartsch retrospective presented at the Fashion Institute of Technology (FIT) in New York in 2015. He also curated and wrote the books of the travelling exhibitions Peter Lindbergh: A Different Vision on Fashion Photography, presented in Italy, The Netherlands and Germany, and two editions of Viktor & Rolf: Fashion Artists, first presented at the National Gallery of Victoria in Melbourne, followed by its presentation in the summer of 2018 at the Kunsthal Rotterdam in the Netherlands to mark the twenty-fifth anniversary of the duo, both exhibitions attracting close to a million visitors. Loriot is also Consulting Curator for Fashion and Textiles at the National Gallery of Victoria (NGV) in Melbourne, and at the MMFA in Canada. He also collaborates with musicians, among them Quebec signer Isabelle Boulay on her latest album art direction, Madonna on her recent tour Rebel Heart and he is the creative director of the current world tour All These Poses of Canadian signer Rufus Wainwright.