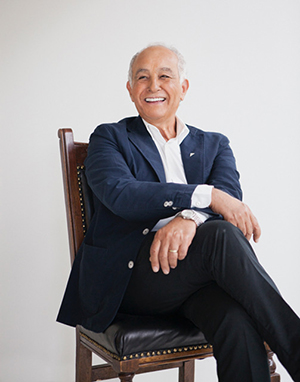 “SUCCESSFUL COMPANIES BUILD ON THEIR FOUNDING CULTURE AND TRADITIONS WHILE LOOKING AHEAD TO THE FUTURE.”

Aldo Bensadoun, celebrated Canadian business leader and philanthropist, is the founder of the ALDO Group. A privately held, Montreal-based company established in 1972, the ALDO Group is internationally renowned as a leader in footwear and accessories brands, as well as in wholesale and Omni-Channel retailing.

The son of a shoe merchant and grandson of a cobbler, Aldo Bensadoun completed his primary and secondary education in France, studied at Cornell University in Ithaca, New York and capped off his studies at McGill University in Montreal. A degree in Economics led him to a marketing research position that, as serendipity would have it, had Mr. Bensadoun doing a project for a regional shoe chain. Eventually, the combination of his inherent understanding of the shoe business, passion for creative freedom and trailblazing spirit, led him to open his own company.

Today, the ALDO Group operates close to 900 retail stores across Canada, the United States, the United Kingdom and Ireland, under three distinct brands: Aldo Call It Spring and GLOBO. Specializing in footwear and accessories, the ALDO Group is dedicated to the design and production of high quality, trend-driven, and accessibly priced fashion, season after season.
Internationally, the ALDO Group has successfully expanded into over 100 additional countries with more than 3,000 points of sale – recently adding new locations in Canary Islands, Austria, Vietnam, Qatar, South Korea, Indonesia and Mexico.

From the on-set, Mr. Bensadoun has had a people-first approach, to ensure that every person is afforded the opportunity to reach his or her full potential. The ALDO Group, with its focus on human development, has established itself as an industry leader in recognition and incentive programs by acknowledging the distinguished achievements of its people.

According to Aldo Bensadoun, “Successful companies build on their founding culture and traditions while looking ahead to the future.” He believes that to be successful, one must understand the customer and make them feel good through the products and services that are offered. It is this simple, yet profound philosophy that has fuelled the constant innovation of the ALDO Group’s retail concepts, brands and e-comm platforms.
In addition to his involvement with various industry associations such as the Retail Council of Canada, the International Council of Shopping Centers and the National Retail Federation, he is a board member of Aritzia – a Canadian fashion brand with increasing international and celebrity appeal, and Hope and Cope – a Montreal-based, non-profit organization that has served as a model for its unique psychosocial approach to cancer care.

Long before the term was known, Mr. Bensadoun was determined to make corporate social responsibility and citizenship a core element of his business, placing a premium on working to enrich the communities in which we live and work. As a Canadian for whom citizenship was not a birthright, he is grateful for the opportunities made possible by this country. It is a common occurrence for Mr. Bensadoun, along with work colleagues and friends, to participate in fundraisers and volunteer their time for community and global causes. Whether in education, social welfare, medicine or the arts, the act of giving back has always been second nature for Mr. Bensadoun.

Most notably, the ALDO Group joined the fight against AIDS in 1985 long before it was fashionable, making it one of the first companies to openly support the cause. The company’s commitment to the fight against AIDS has generated over 10 million dollars in donations to various AIDS organizations and charities around the world.

In May 2017, the Bensadoun Family Foundation announced a donation to McGill University to develop the Bensadoun School of Retail Management: an inter-disciplinary, state-of-the-art school dedicated to all facets of the retail industry. In addition to the school, this donation will be used to fund student scholarships, hire new professors and establish a research chair in retailing. Mr. Bensadoun has been recognized for his lifetime of outstanding achievement, dedication to the community and service to the nation; in 2011 he was appointed as a Companion to the Order of the Business Hall of Fame and in 2012, he was named as an Officer of the Order of Canada. He also received the Queen Elizabeth II Diamond Jubilee Medal and was awarded an honorary doctorate degree (Doctor of Laws honoris causa) from McGill University. Mr. Bensadoun’s accomplishments did not go unnoticed prior to these tributes. In 1986, he was named International Client of the Year for Outstanding Customer Service, and over the next 20 years he was honoured with many other accolades including: Two/Ten Foundation’s Shoe Person of the Year (1996), Award of Distinction from Concordia University (1997), a Lifetime Achievement Award from the Retail Council of Canada (2000), an Award of Distinction from Ryerson University (2002), a Management Achievement Award from McGill University (2003), Marketer of the Year (2005), a Visionary in Retail Innovation (2007), Business of Fashion 500 Hall of Fame (2014), Philanthropist by Excellence (2017) and Cercle des grands entrepreneurs du Québec (2018). And yet in the face of all this acclaim, Mr. Bensadoun has remained as unpretentious and sincere as ever.

In fact, despite the meteoric rise to international success and continued growth of the ALDO Group, the man behind the brand – its founder, its namesake – remains one of the kindest, down-to-earth, and generous people one will ever have the good fortune to meet.
A selection of some of the healthcare and educational institutions of which Mr. Bensadoun is an active member and supporter:
McGill University
Sir Mortimer B. Davis – Jewish General Hospital
Mount Sinai Hospital
Advisory board of the Faculty of Management of McGill University
The Montreal Heart Institute
The Montreal Symphonic Orchestra
The Montreal Museum of Fine Arts
Centraide
The Canadian Cancer Society
Montreal Children’s Hospital